Post Office Square is a Hidden Gem of a Park

When you want to sit in a park, and Boston Common is just too grubby, take a 14-minute walk to Post Office Square.

It's small, and meticulously maintained.

Here's a 360-degree image from a cool Fall day. I took the picture to try out a virtual reality camera.

In the 1980s, Post Office Square was the site of an old crumbling garage.

Then a bunch of companies from the area formed a civic group to radically change the space. The Friends of Post Office Square collectively donated more than $1 million of the initial funding needed to acquire the existing garage site, demolish the garage, and construct a new 1,400 space garage underground, making possible the creation of what the group envisioned at street level: a new public green space in the center of downtown Boston.

Here's a write-up of the project by a Public Spaces group.

How to Find it

All over the park.

Sip is an owner-operated cafe serving great coffee and a menu of soup, salads and sandwiches on artisan breads featuring locally grown produce. The Cafe is open weekdays from 6:30 am to 6 pm in the summer and to 5:30 pm in the winter. 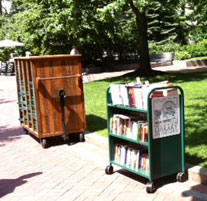 Green seat cushions may be borrowed midday, Monday through Friday during the summer, from a cart located at the south end of the lawn.

A book cart is rolled out around midday, Monday through Friday during the summer. Borrow a book on the honor system.

Check out the Midday Music schedule on the Park Calendar.

Free yoga classes have been going on since 2012. A free fitness program, called P.O. Fitness, started in 2013. The class details are shown on our Park Calendar each season.

Place Report: Art in Print in Allston Art in Print puts out editions of prints by local artists for 25 cents. It is now on its seventh edition.  These prints are dispensed in old fashioned metal boxes, so called "honor boxes," in the Boston neighborhood of Allston, which Harvard University recently expanded into.

Place Report: Pine in the Sand After the sprawling, messy, free-form expression along the Somerville Bike Path Sculpture Garden, I was up for something minimal and curated.  Pine in the Sand fit the bill. It's a striking installation: a single living pine tree atop a sand dune, surrounded by concrete barriers and a cluster of granite blocks.

Place Report: Somerville Bike Trail Sculpture Garden With District Hall closed for the holidays, and a second Covid surge descending like a cloud on indoor places all over, I decided to take my placemaking research outside. I started with a sculpture garden that had sprouted up alongside a nearby bike trail in Davis Square, Somerville.

Tikkaway - Indian Cuisine Deconstructed Miss you, Tikkaway. A regrettable casualty of the Covid pandemic: Tikkaway. The fun of Tikkaway was assembling the basic components of Indian cuisine yourself, in a sparkling clean, white, ceramic-tiled establishment.  Tikkaway was Indian cuisine re-imagined as a fast casual offering.